Here is a personal project of mine. A pitch package I have been working on for an animated sitcom production.  I'm very fond of this dysfunctional little bunch, and would love to see them come to life on a glowing screen. Big thank's to my sis Isla for all the help in corralling this heard of frantic concepts, as well as adding a dash of her own flavor into the mix. 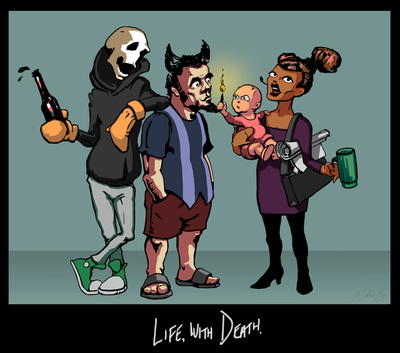 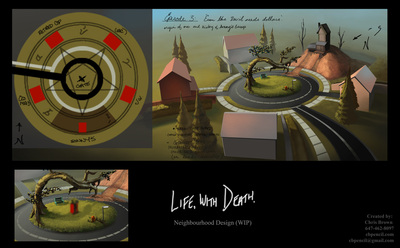 A freaky animated sitcom with a whole lot of heart.
Created and Designed By: Chris Brown, cbpencil.com, cbpencil@gmail.com
Written in collaboration with Isla Brown

When the mother of his onetime sperm donation shows up on his doorstep, Sonny, the heir to Satan's thrown, discovers that sometimes the best life lessons are straight from Hell.

Sonny
Growing up, Sonny was an average kid in an average town with below average grades and an above average capacity for doing absolutely nothing. His sweet-as-honey adoptive parents were great, but when Sonny discovered that they were actually hired minions and his father was Satan himself, life got a little less average. Now, his Devil of a father expects him to prepare to take over the throne and has assigned D, the Grim Reaper to be his mentor. Sonny's life is complicated even further when, out of options and funds to make a simple car payment, he turned to the local sperm bank to bail him out of his most immediate financial woes. Little did he know, his one-time "anonymous" donation would turn into a life-long parental obligation he never budgeted for--financially or otherwise.

Constance
Constance Bathory's family history isn't something she willingly shares with even the most intimate of friends. Having spent the first decade of her life in what can only be described as opulence, her family's plunge in social status after her father's public disgrace as a Supreme Court judge stands as a prominent life-lesson for the high profile defence attorney. At only ten years old, this life-altering event formed her highly-driven, no-holds-barred approach to every aspect of her life.

After a string of failed relationships, her insatiable desire to become a mother was sated only after a trip to the in-vitro fertilization clinic. Constance needed to uncover the cause of the persistent and inexplicable phenomenon surrounding her newborn son--a mission that landed her on the doorstep of who should only have been the anonymous sperm donor, Sonny. Despite her best judgement, her maternal instincts drove her to move in so that she can better understand the one male she's ever really loved and his dead-beat genetic donor.

D
D's just another regular joe who enjoys living a laid-back lifestyle with his like-minded best bud, Sonny. The only real difference is probably the fact that, beyond the babes and brews, D is also the Grim Reaper. Some years back, D had been charged by the Devil himself with the mission of preparing Sonny for the throne. While being the Angel of Death is a hefty and demanding job, it turns out that the collection and delivery of Hell-bound souls is quite easily outsourced. Establishing a team of interns has allowed for the now semi-retired Death's focus to fall on the education of the heir to the throne of Hell... Well, sort of. While living with Sonny, the comforts of the mortal life have corrupted Death by arousing his very own inner slacker. Having been in gruelling servitude since life began, D's thrilled at his new freedom to be as indifferent and insolent as any other college-aged schmuck. His experience of the world is unparalleled and at times, his irresistible charm and cunning wit even reflects this. Though even after intimately knowing every nuance of death, D's only just beginning to understand the basic meaning and inherent beauty of Life.
-Always (LET’S HOPE!) wearing oven mitts, protecting those around him.
-Passions/pastimes –Video games, horticulture
-Ability to appear to others as anyone he wants when out and about (great gags-neighbourhood bbq ep)

Lucifer
The legendary first ruler of the underworld. Now retired and not taken so seriously, often ridiculed by the family. His ramblings rarely make any sense.
-'D' likes referring to him as “A few screws Lucifer”
-Lives in backyard shed of the home

Damian
The current devil. A dapper don. Egotistical, self-assured, almost always right and a terrible father. He's disappointed with Sonny's lack of interest in the family business, and constantly ridicules Sonny and puts him down. He takes a vested interest in the new baby as possible heir to the throne, and attempts to emasculate his son by hitting on the mother of his grandchild. The series will focus on the relationships between fathers and sons, Sonny trying to prove his father wrong, while proving to be a better father to his own child. !!!!!

The Russells- Family living next door at #3

Joseph and Evelyn are the parents; the kids, Isaiah, the oldest, and the twins, Charlotte & Josephine. Jehovah's Witnesses, they live apart from a JW community due to Isaiah's present state of religious disassociation. Joseph and Evelyn are waiting for their son to repent and re-associate before the Armageddon. Isaiah, a teen 'emo-goth' is preoccupied with his next-door neighbours, who seem somewhat satanically associated and interesting, even from afar. At the beginning of the series he’s stalking them, trying to figure out who they actually are.


D's Subordinates:
These are the employees that D has to take care of Life Removal in the world. They are:

Pestilence- Diseased looking himself, handles all of the illness/Disease-borne deaths.

Accidental Death- Janitorial, all of those pesky "oops, you're dead" fatalities; the clean-up guy.

Boghaus was formed in Sonny's garage one day when Sonny and D's jam session caught the ear of neighbouring Isaiah, a likewise true fan and expert of the Norwegian Black Metal scene. With no lead singer, Boghaus is more than just a band, but also represents where its three members feel fully at peace and in their respective elements.